Wolves arrived at Elland Road in 4th place and faced a Leeds team lucky to be in 15th place following a sequence of 3 draws and a loss in their last four games. The game started quietly with both teams looking to gain the ascendancy and the early break. An early ball from Gaetano Berardi found Mirco Antenucci who was flagged offside by the referee’s assistant. Leeds were employed a much closer marking system than in previous games, closing down the Wolves players and denying them time on the ball. On 5 minutes, a Bianchi chipped pass over the Wolves defence proved a little too strong for the charging Morison. A few minutes later, Bianchi was caught out on the touchline and was rescued by Giuseppe Bellusci; both players were guilty of ball-watching and a quick throw nearly caught them out and Bellusci had to concede a corner. Wolves were passing much better than Leeds and had the better of the opening 10 minutes’ exchanges. On 12 minutes, a Mowatt pass from Antenucci led to a corner which was quickly cleared. A minute later, Steve Morison fired a hard, low cross into the Wolverhampton area and Alex Mowatt hit a shot into the side netting. Leeds were having much more of the possession and on 18 minutes this had telling results. Mowatt received the ball in the Leeds half and his quick look up noticed Steve Morison free on the right. Mowatt played a long, cross-field ball which was controlled well by Morison with his right foot. Morison turned the ball back inside to Mirco Antenucci who made one touch before driving it through the legs of a defender and beyond the despairing dive of Carl Ikeme in Wolverhampton’s goal. Leeds really should have made it 2-0 on 24 minutes when Morison received a pass from Antenucci and turned it inside for an unmarked Alex Mowatt to scuff his shot directly at the Wolves ‘keeper. The rest of the first half was a pretty much similar affair of half chances and neat and tidy passes with one highlight being a Bianchi pass on 39 minutes leading to a Mirco Antenucci shot that Carl Ikeme turned away from goal. The half finished 1-0 to Leeds.

Wolves looked much the brighter team at the start of the second half and started to take the game to Leeds. Wolves were committing men to the attack and, at times Leeds struggled to repel the Wolverhampton attackers. It was backs-to-the-wall stuff really and Wolves were definitely the better of the two teams. Leeds were, most times, content to stand off Wolves which, in turn, allowed them time on the ball. The first sign of danger for Leeds came in the 59th minute when a Wolves free kick from the right resulted in a glancing header from Wolves striker Nouha Dicko which Marco Silvestri acrobatically pushed around his right-hand post. Leeds’ inability to press Wolves when they were in possession of the ball came to haunt them in the 66th minute when a throw from the right touchline was played into the Leeds box, deflecting off the hapless Giuseppe Bellusci into the path of James Henry who lashed it hard into the high right of Marco Silvestri’s goal. Buoyed by this goal, Wolves committed more men forward and still Leeds sat off them which allowed the ball to be worked towards the Leeds goalmouth with alarming regularity. The killer goal from Wolves in the 85th minute highlighted the difference between the two teams, the ability of players able to make intelligent passes and combine this with quick movement. Wolves’ Dutchman Rajiv van la Parra received the ball, turning it inside for Dicko whose square ball beyond Marco Silvestri left Leon Clarke with the simplest of tap-ins. With 4 added minutes, Leeds attempted to pile forward and take whatever chances were on offer; Paraguayan U20 international Brian Montenegro being brought into the mix for his Leeds debut. However, there was to be no fairytale finish for Leeds and, despite some industry, the game petered out into yet another disappointing loss.

Another game where Leeds were out-muscled, out-fought and eventually outplayed by the opposition. Leeds only had 40% of the games total passes as the Wolves central midfield duo of Kevin McDonald (84 passes – 90% accuracy) and Lee Evans (76 passes – 76% accuracy) easily took control of the centre of the park and allowed the visitors to build up their attacking platform. A telling figure is when you consider the target area for passes made into the final/opponent’s third of the field; Wolves made 405 such intended passes against Leeds’ 221 such intended passes – Wolves making 89% more passes into what can be considered the ‘attacking third’ of the field. Wolves also made 79% more cross attempts than Leeds did (34 to 19)  and had a vastly superior shot accuracy (50% – 9 from 18) that Leeds did (23% – 3 from 13); the latter showing that you have to work the keeper if you want to have scoring opportunities.

The moral of the story – when you are living off scraps you need to be fight for what falls your way; Leeds didn’t do that in the second 45 of this game.

Marco Silvestri was, yet again, largely solid at the back and a reassuring sight for Leeds United fans. Of the 6 shots on target by Norwich, Silvestri saved 3 of them with an SPG rating of 3.00; his distribution accuracy was markedly up on Saturday compared to Tuesday’s game vs Norwich (62% compared to 43%). The 4 saves made by Silvestri keeps him as the #1 ranked goalkeeper in the Championship when it comes to saves made (44) and it often seems an Herculean effort that he is keeping Leeds in games that, realistically, they have no right to be in. 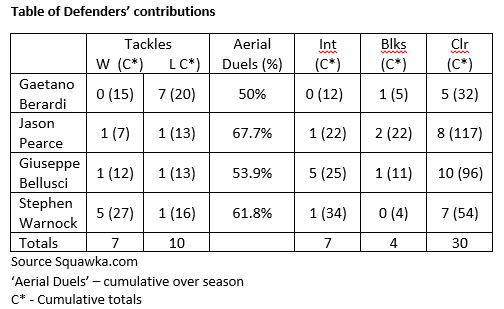 The Leeds defensive unit had to stand up to severe pressure from the Wolves team on Saturday, especially after half time as Wolves poured forward in, often, relentless fashion. The returning Stephen Warnock put in another solid display, confounding those ‘Facebook critics’ calling for the axe to fall on him. He had 5 (71%) of the defensive units 7 tackles; these 5 tackles being above his per 90 metric for ‘tackles won’ of 2.59. To round off a good evening, Warnock also had 48 passes with 35 of these being classed as ‘short passes’ and the pass distribution being 28 targeted to the ‘final third of the pitch’. The rest of the Leeds United defensive unit looked accomplished in the first half; less so in the second. They allowed the Wolverhampton players onto them, mainly in the second half, largely standing off of them and allowing them time on the ball/to shoot. 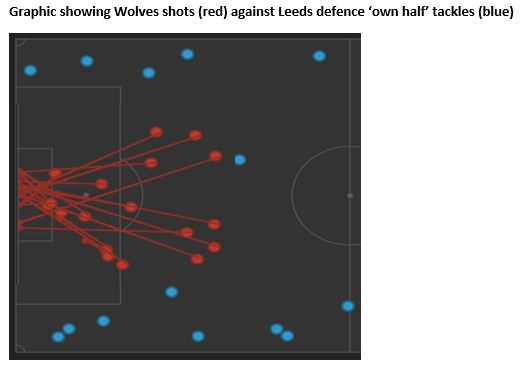 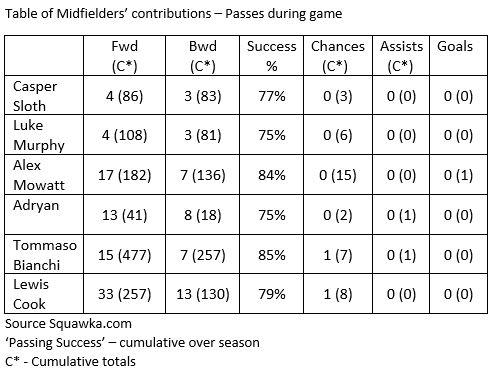 Leeds were largely fighting a defensive battle and this showed as the team were out-passed by 562 passes to 373; Leeds having barely 40% of the passing possession. As a midfield unit, they only passed the ball 139 times – 37% of team total passes. Of the midfield passes by all 6 midfield players who took part in the game, 82 passes (59%) had a ‘target zone’ of the ‘final third’ of the field, at least showing the Leeds midfield attempted to play balls into the opposition’s defensive area. At times overwhelmed, the Leeds midfield did, however, battle for the ball with the midfield players contributing a total of 12 of the teams 29 tackles, a return of 41% of the team’s total tackles. To put it bluntly, Leeds’ midfield underperformed in today’s game with only youngster Lewis Cook showing anything approaching per 90 averages for the season. Total pass attempts-wise: Tommaso Bianchi returned only 22 pass attempts (per 90 return 57 pass attempts), Alex Mowatt returned only 24 pass attempts (per 90 return 46.39 pass attempts) and only Lewis Cook emerged with some glory recording 46 pass attempts (per 90 return 48 pass attempts). On the whole, it was a game that Leeds’ midfield would more than likely prefer to forget.

Leeds took the lead thanks to Mirco Antenucci’s 4th goal of the season after good link up play involving his strike partner for the day Steve Morison. Both strikers worked hard on what was a frustrating day for them chances-wise with Leeds only having 12 total shooting opportunities – 8 of these coming in the opening 45 minutes. Of these 8 first half shots 4 were by the strikers; 2 by Mirco Antenucci (goal and blocked shot) and 2 by Steve Morison (saved and blocked shot). This has been Leeds’ weakness all season, an inability to get the ball to the strikers in order for them to rattle off shots at goal. When they do take shots, Antenucci is the most accurate of Leeds’ strikeforce at 53% accuracy (from 25 shots). Somehow, and quickly, Leeds’ midfield quartet really do need to start feeding the front two with shooting opportunities.

Saturday was not a very good day for Leeds United; they failed to learn from mistakes of standing off attacking players at Rotherham and were duly punished. Leeds coach Darko Milanič paid the ultimate price after this game, sacked by Massimo Cellino a mere 6 games and 32 days into his coaching tenure.