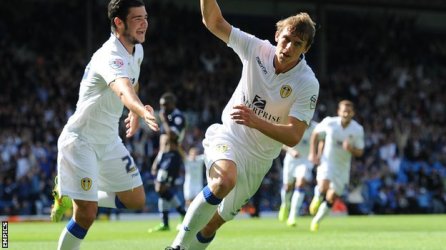 “If it ain’t broke, don’t fix it!” goes the oft-used English adage; oft used by those who cannot be bothered to do something and are happy to postpone it until the next opportunity or when they can shake off their current apathy. There have been Leeds fans clamouring that plenty was broken down LS11 way and, after a woefully dismal display against ‘noisy neighbours’ Bradford City, il capo dei capi Cellino removed Coach Hockaday from his position at Elland Road. For today’s home game against Bolton, Academy boss Neil Redfearn is in charge and hoping for a much better result than last year’s corresponding game at Elland Road – a 5-1 loss and a game where Leeds were totally outclassed.

Things really haven’t been going well for Leeds United over the opening 6 games of the Championship 2014/15 and Carling Cup campaigns with the team receiving more red cards (4) than League points (3). Today’s game sees Sam Byram miss the second of his compulsory 3 game suspension for his dismissal against Watford but Leeds do welcome back Gaetano Berardi after his 3 game suspension for an attempted roundhouse kick in the Carling Cup win against Accrington Stanley and Giuseppe Bellusci following his 1 game suspension after his recent sending of at Watford. There has also been some transfer movement at Elland Road with Danish international Casper Sloth signing from AGF Aarhus and he has been allocated the number 33 shirt; there are also rumours of more signings at Leeds United with Adryan’s long drawn-out saga and tug-o-war between Leeds-Cagliari-Flamenco to be finally sorted and also rumours of an impending signing of young Italian U19 international defender Dario del Fabro.

The team news sees a repeat of the defensive unit that was fielded in the Carling Cup tie with Scott Wooton filling in at right back for the suspended Sam Byram and Bellusci again partnering Pearce in the centre of defence. Stephen Warnock, ever present this season, maintains the left back position. The midfield unit, barring Tommaso Bianchi is all changed with Lewis Cook following up 47 minutes of cameo performances with a place in the starting line-up, Alex Mowatt returning from injury for his first game of the Championship campaign and newly signed Danish midfielder Casper Sloth getting the nod for the fourth midfield position. Up front, Italian Mirko Antenucci again starts partnering Billy Sharp.

What was instantly noticeable from the first whistle was the more impressive passing that, at times, was so effective that Leeds were creating chances…not many chances but some. There was also better movement and link up play throughout the whole team with the runs of Mirko Antenucci being especially noteworthy. It was a combination of this that led to Stephen Warnock’s goal on 17 minutes; some say a mishit cross, other don’t care as a goal is a goal and Leeds fans don’t care where they come from. After the goal, Leeds took a hold of the game and began to create more chances and put together better phases of play. After half time, Bolton upped their game and went at Leeds more, forcing Leeds onto back foot more. Leeds’ frailties began to show more as the game progressed with Bolton ending up having 22 shot attempts as opposed to Leeds’ 7; a total shot ratio (TSR) of 0.61. Leeds were kept in the game due to the heroics of goalkeeper Marco Silvestre who made 8 saves including one from former Leeds’ favourite Jermaine Beckford who entered the field as a second half substitute to a round of applause from Leeds fans alongside a rendition of “You’re Leeds and you know you are.” Leeds themselves made 2 substitution of their own; Stephen Warnock leaving the action injured on 55 minutes and replaced by youngster Charlie Taylor whilst debutant Casper Sloth (it’s pronounced Slott apparently) exited on 78 minutes to be replaced by AC Milan loanee Zan Bendicic who gained his first taste of Championship action.

Marco Silvestre performed heroics in the Leeds United goal to keep both a clean sheet and to help deliver a very welcome 3 points. He made 7 saves, including one from former Leeds hero Jermaine Beckford and then clawed back the follow-up shot from the line; he also, deservedly, won the man-of-the-match award. His distribution accuracy was way down on previous weeks with 28%; this being the result of having to clear a higher than usual number of back passes from team-mates (11 today). His overall distribution distance is up from previous weeks at 62 metres mainly due to the fact he didn’t elect to distribute using thrown out balls which have a lower distribution distance. Silvestre’s ‘kicks from hand’ and ‘goal kicks’ both showed an increased distance over all previous returns with distances of 68 and 62 metres respectively. 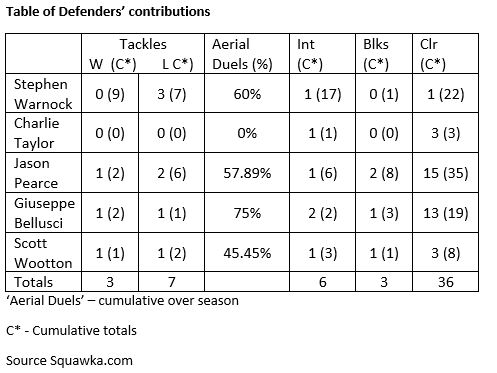 After the recent debacles in defence, Leeds were due a decent performance and this time they delivered; this performance going some way to wiping away the nastiness seen in previous games. At times suspect, at times strong, Leeds’ defence played as a unit. In his first game back after his one game suspension for hacking down Forestieri in the Watford game, Bellusci showed just why Leeds chose to pay for his services. What was particularly impressive about his performance was his partnership with Jason Pearce in the middle. They combined for a high number of clearances totalling 28 between them (Pearce 15, Bellusci 13) as part of a team total of 36 clearances. Another important part of Bellusci’s game was the high proportion of aerial duels he has won (75%) and the 2 interceptions that he made. As a defensive unit, the 5 players used on Saturday totalled 141 ‘performance points’ (Squawka) with Bellusci and Stephen Warnock leading the way with 46 and 42 points respectively. 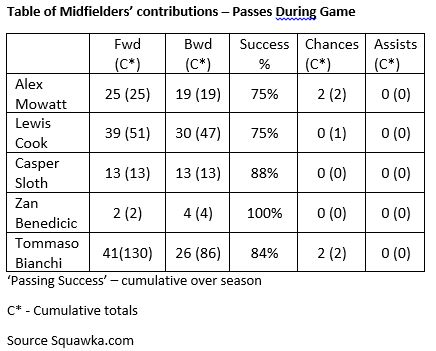 ‘Chances were at a Premium’ is a phrase that is used so often in football that it has gone beyond clichéd and met it on the way back. Leeds’ midfield has been lacking in creative input thus far this season; this midfield saw three changes with Austin (injured), Murphy (suspended) and Tonge (dropped) bei replaced by Alex Mowatt, Lewis Cook and new signing Casper Sloth. Leeds have been a busy midfield this season, if not very productive but today it was changes that led to chances. The ‘changed’ midfield still maintained the high number of passes (table above) but this time they created chances, 4 of them, yes 4 chances. Alex Mowatt, in his first game of the season created 2 of the chances and Tommaso Bianchi also weighed in with his first 2 created chances of the season. Zan Benedicic also came on, replacing Casper Sloth, for a brief 12 minute cameo introduction to Championship football. From the San Siro to Elland Road, Benedicic would have hardly noticed the change. This all bodes well as Leeds head into the two week International break and presents a selection headache what with the announced signing of Adryan, the Brazilian starlet from Cagliari via Flamengo.

Billy Sharp’s contribution was tidy and he did benefit from some of the created chances by unleashing 2 shots. Sharp also helped to create 2 chances and also completed 15 passes. It was the contribution of Mirko Antenucci that had fans and commentators alike salivating. Whilst not scoring, he did everything else that he could to the benefit of the greater good. Antenucci made some incisive runs which forced the defence to scramble and he also completed 20 passes to others; his link up play, bridging the midfield and bringing others in to play was also a strength he displayed. To round off his impressive individual contribution, he helped to create one of Leeds’ 7 chances and also had a shot opportunity – which wasn’t on target.

So, to round off, a change in personnel brought about a change in fortunes. In the aftermath of the Hock-a-days, Neil Redfearn made changes that brought about change. It was nice to see a Leeds midfield not over-run for once and one that’s creating chances.

After this narrow victory, after 5 games Leeds are 3 points off the Playoff places.